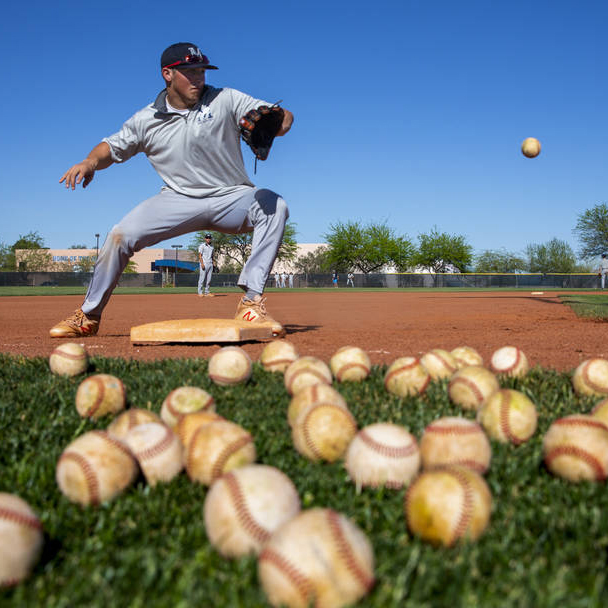 The Meadows senior Sam Kaplan won't be the first Ivy League student in his immediate family. That distinction belongs to his father, Stuart, a graduate of Dartmouth and Harvard Medical School.

But the younger Kaplan still will attend an Ivy League school this fall.

Kaplan, a senior outfielder, announced in June his commitment to Cornell — becoming the first Mustangs baseball player to commit to a Division I program. He's batting .683 with five home runs, 10 doubles and 24 RBIs for The Meadows this season.

The 6-foot-1-inch, 200-pound right-hander combines a palpable passion for the sport with a tireless work ethic.

"Seeing him hit in a game, it's like 'Whoa, where did that come from?'" said Mustangs first-year coach Andy Concepcion, Kaplan's former personal instructor. "He's been doing this for many years. He sets a good example for the other young guys coming up."

Kaplan remembers hitting Wiffle balls in his backyard as a toddler, and his mother steering him toward the hard ball during elementary school. He said his pursuit of a collegiate career intensified during middle school, and he began training more seriously with local instructors Concepcion and former major leaguer Mike Easler, who played 15 professional seasons.

"Baseball is really a big sport here in Vegas. Before you knew it, this is what he loved to do," said Stuart Kaplan, a neurosurgeon. "Between school, and this, these are his things."

With academics in mind and his father as a role model, he committed to Cornell, fulfilling two lifelong dreams in the process — playing college baseball and pursuing a prestigious education.

"We laugh with Sam. We say he'll be anywhere from a first-round pick to he'll flail out in college," Stuart Kaplan said. "But he knows the most important thing he can do is get his education, because that will be the thing the carries him over the rest of his life. He does phenomenal in school. He's a good ballplayer. He enjoys the game. He loves it."

Along with training with the Mustangs, Kaplan lifts weights six days a week and hits five days at local batting cages. Teams in the Class 2A Southern League tend to pitch around him, and Concepcion said Kaplan might see one or two desirable pitches a game.

"I feel like I believed in myself for a pretty long time," Kaplan said. "I felt that if I put hard work into it and really put everything into it, I thought I'd be able to get there. I've just worked really hard."

To view the full article by the Las Vegas Review Journal, click here.